Public Submissions and debate on Calgary's "Guidebook for Great Communities" has just got underway for the second day at City Hall.

For anyone who hasn't been following the Guidebook issue before this week - and we don't blame you! - the Guidebook is the City's latest attempt to master-plan the City from the top down.

To be clear, there are actually some positive changes in the 130+ page Guidebook, where the City will allow for more competition, choice, and markets in certain areas.

Council is currently working their way through more than 150 public submitters on the plan, almost all of whom have complaints about the lack of consultation or lack of quality consultation that the City has done on this issue.

Unfortunately, as we pointed out in our email last week, this kind of faux consultation is commonplace and done very much deliberately by the City in a process we call Decision-Based Evidence-Making.

First up yesterday morning, Council debated whether to delay further consideration of the Guidebook until after the upcoming October 2021 to allow for Council candidates to make the case for the plan on the campaign trail.

Council voted 3-11 against a motion for this delay introduced by Councillor Chu.

Here are how your Councillors voted on that delay: 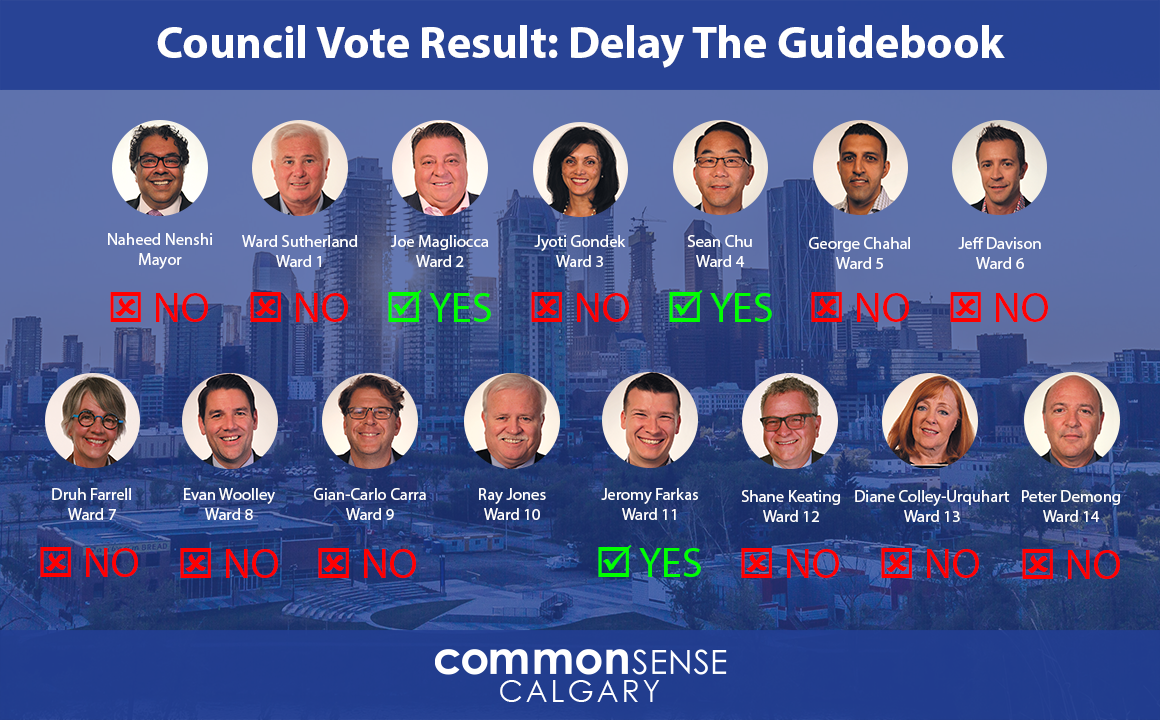 With the delay being rejected, Council then moved on to debate the Guidebook itself.

We live-tweeted the entire Guidebook debate, including summaries of the City's utopian presentation about how amazing the Guidebook is, and the first 24 public submissions before Council finished at about 9:30 pm.

If you'd like to get caught up, you can go back and review this thread of live-tweets here to catch up on all of yesterday's meeting.

Today, public submissions are continuing, and we are once again live-tweeting the whole thing so you can follow along with us.

As a City Hall watchdog, we provide live coverage of many City Hall meetings, as well as spending a significant amount of time summarizing what's happening at City Hall into easy-to-read Briefs, and short weekly newsletters.

We've been covering City issues for more than 8 years now, which gives us a unique insight into how the City is supposed to work, how the City actually works, and the tricks they try to pull when they think they can get away with it.

That work takes a lot of time and resources, but we think it's vital that someone is keeping tabs on City Hall at all times, not just on individual issues like the Guidebook, but on everything they do.

As a reminder, Common Sense Calgary is an independent non-profit organization and everything we do is funded by donations from Calgarians like you.

If you appreciate the work we do on this and many other municipal issues and would like to help us do more of this type of work, please consider making a donation to help sustain our efforts.

Even a small contribution can really make a difference, so please consider clicking here and making a donation:

Thanks for your ongoing support.