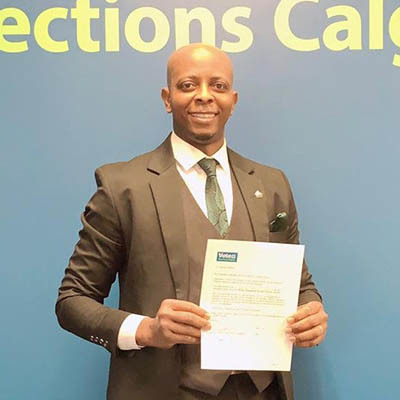 Political experience: consulted and worked with Canada, USA, British Governments on issues of good governance from a not for profit perspective. Did internships at City of Toronto under former City councillor Adam Giambrone for 2 years. Professional experience: A development consultant- consulted with governments and multilateral organizations on good governance, access to Justice and youth development. Teddy’s experience transcends the development world, Politics, oil and gas, REIT. Marketing , coaching minors , security , janitorial and entrepreneurship.

Biggest issue Calgary currently faces?Tax hikes If elected, what are the three policy items you would pursue first? Through building confidence and trust within council and propose to reduce taxes for home owners and businesses over 4 years - 10% cap across board. Introduce a Shadow Youth cabinet and expand BRT and handicap access for Calgarian of all ages.

To serve and provide services needed to Calgarians, collaborate and partner with provincial and federal governments on huge capital investment projects and to solve social inequality issues affecting our City. Finally to engage and listen to communities groups/associations in all ramifications of municipal development. Too many things, not prioritized and pretty much does not put Calgarians first.