Once again, as in the 2017 election, Common Sense Calgary is the only organization in the entire City that has conducted this level of in-depth polling, with the detail that is required to get meaningful results at the ward level.

Having said that, we take our responsibility to present you with reliable information seriously, and for this reason, we have chosen to only release 12 of the 14 ward poll results this year.

That's because, while polls tend to be accurate within the margin of error nineteen times out of twenty, in these two particular wards the margin of error was much higher than we would normally be comfortable with, thanks to a smaller response rate.

With that said, on to the results, which are all weighted for age and gender, and then presented as a percentage share of the decided vote in each race.

For Mayor, the race is hotly contested, with Councillor Farkas leading Councillor Gondek by just a single percentage point - 31% to 30%. Given the large sample size and small margin of error of this poll, this race is statistically a dead heat. 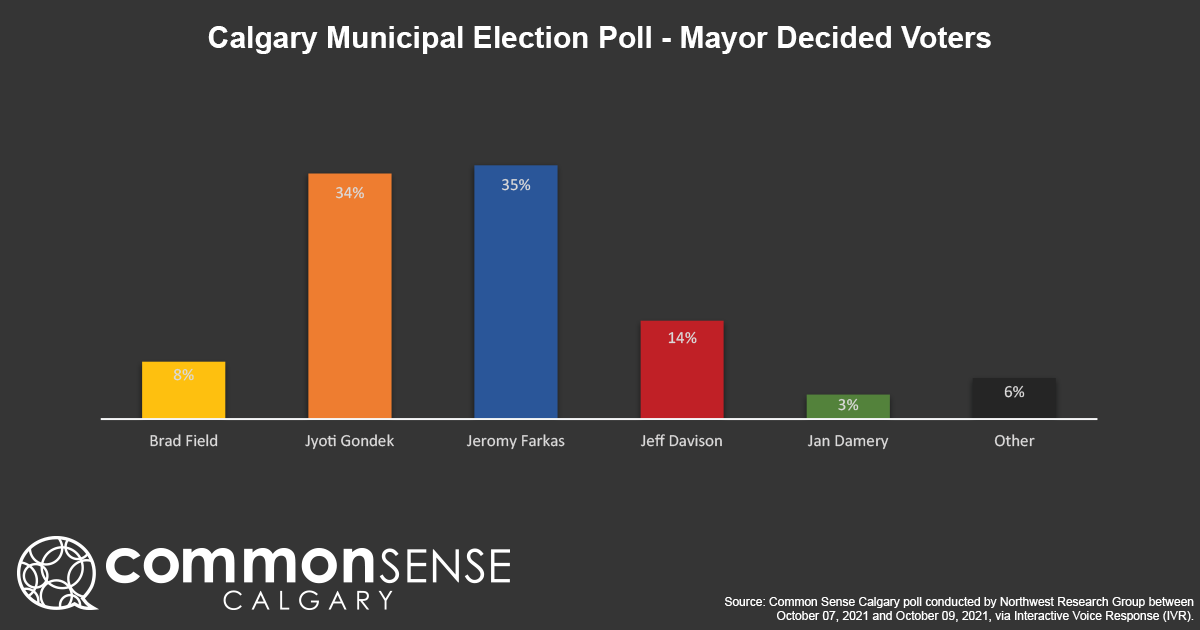 In Ward 1, former City staffer and union-PAC-endorsed candidate, Sonya Sharp, holds a clear lead on 45%, followed by Steve Webb on 14%. 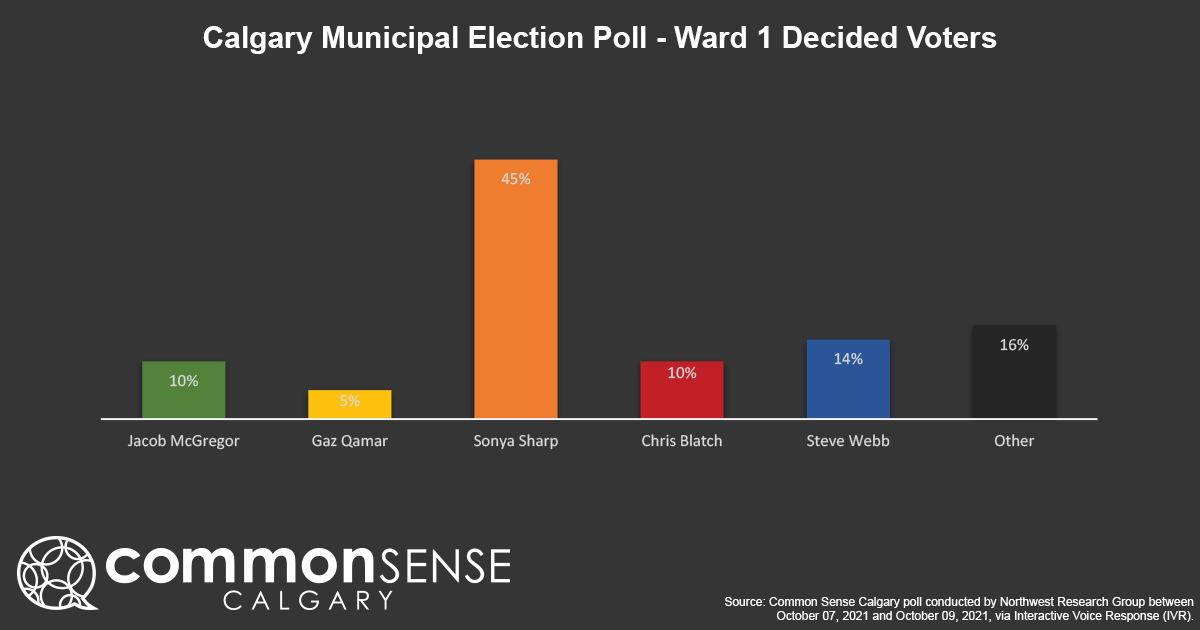 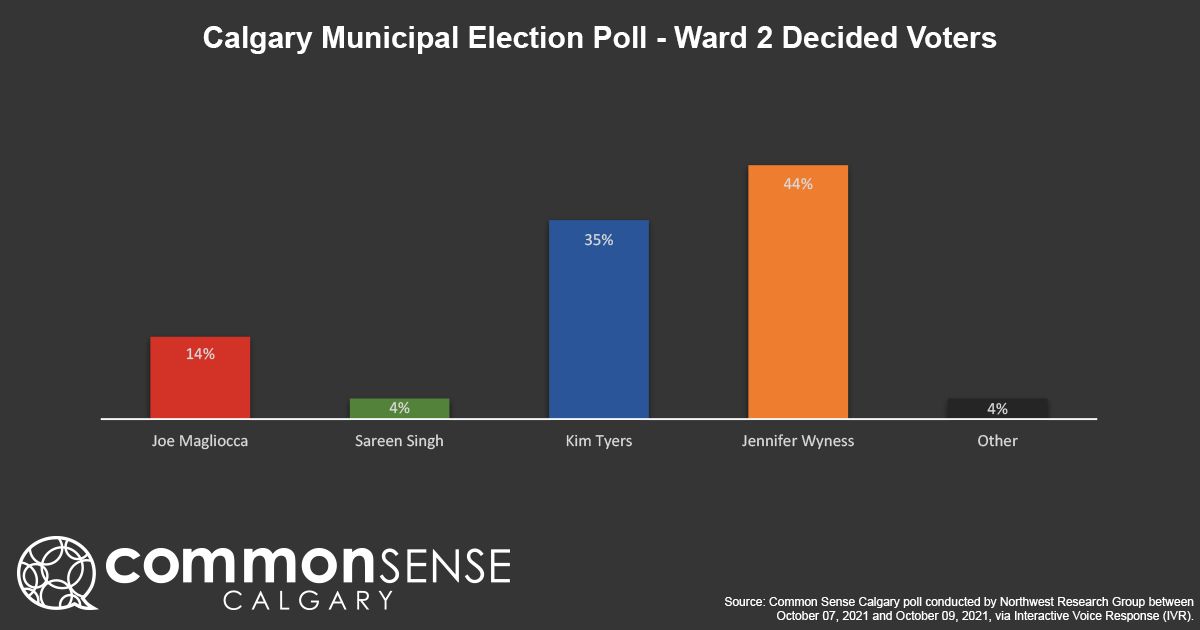 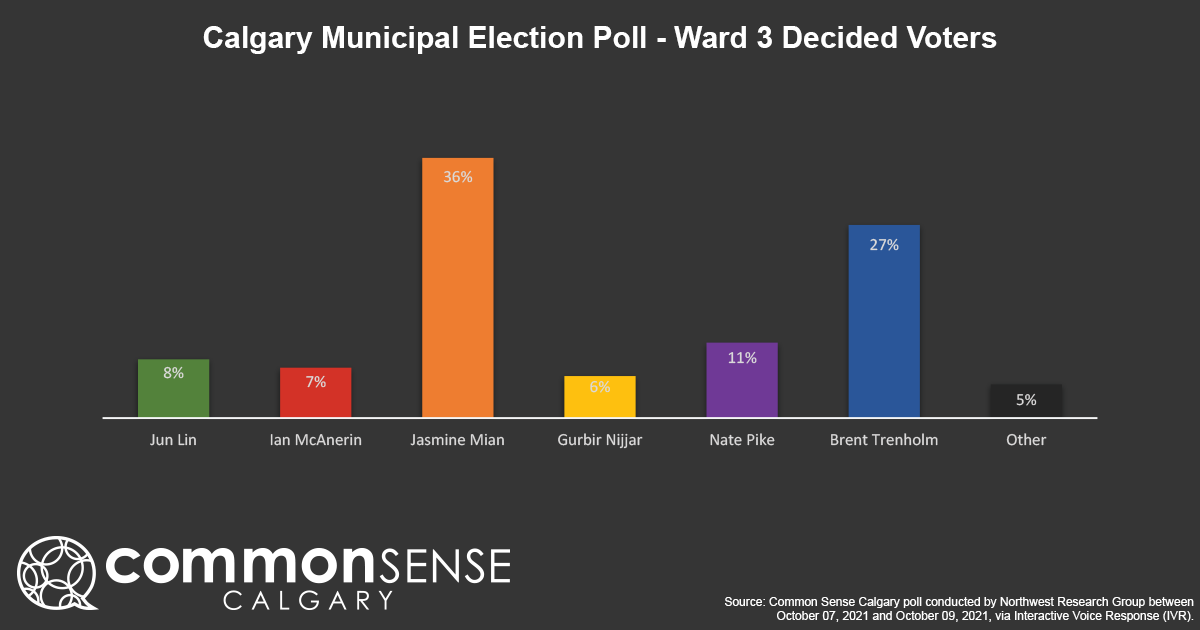 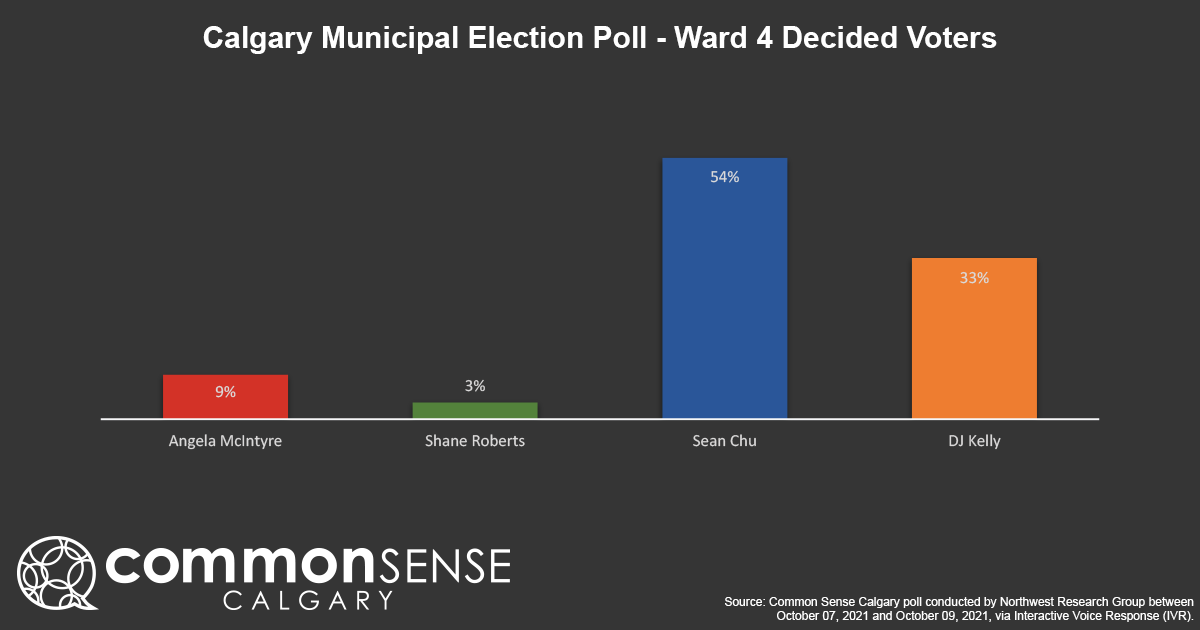 In Ward 5, we have chosen not to release the poll result, as the response rate to our survey provided results with a larger margin of error than we are comfortable with.

In Ward 6, former Councillor Richard Pootmans looks set to return to City Hall, polling at 55%, ahead of his main opponents Sanjeev Kad on 23% and Lana Bentley on 19%. 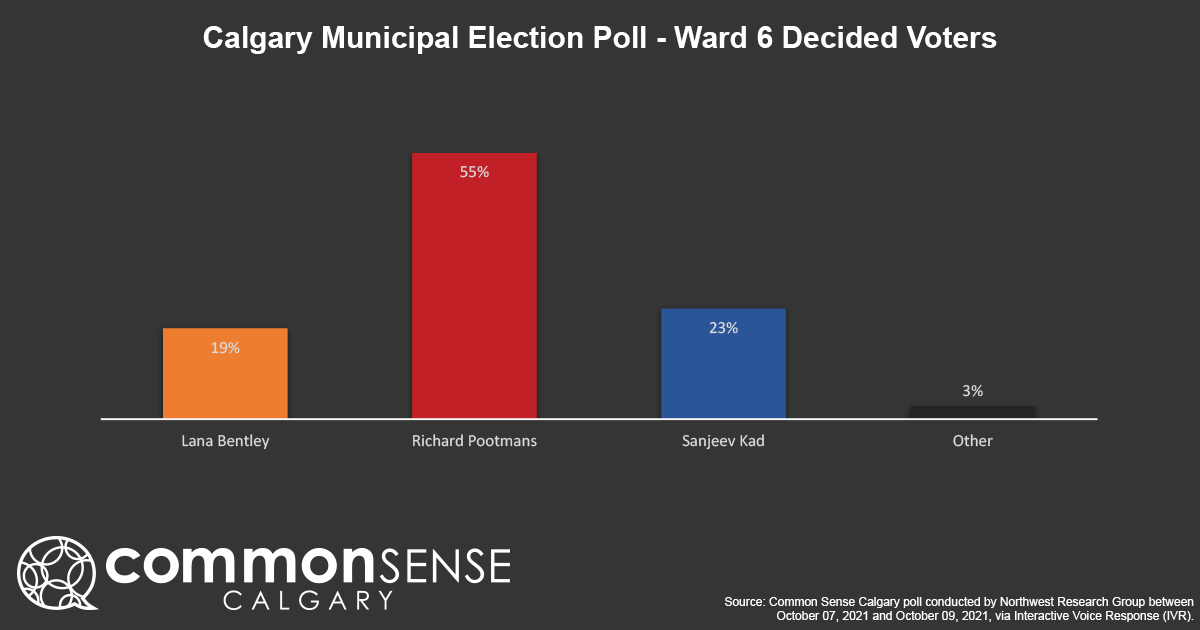 In Ward 7, Terry Wong is in first place on 29%, closely followed by Erin Waite in second place on 25%. 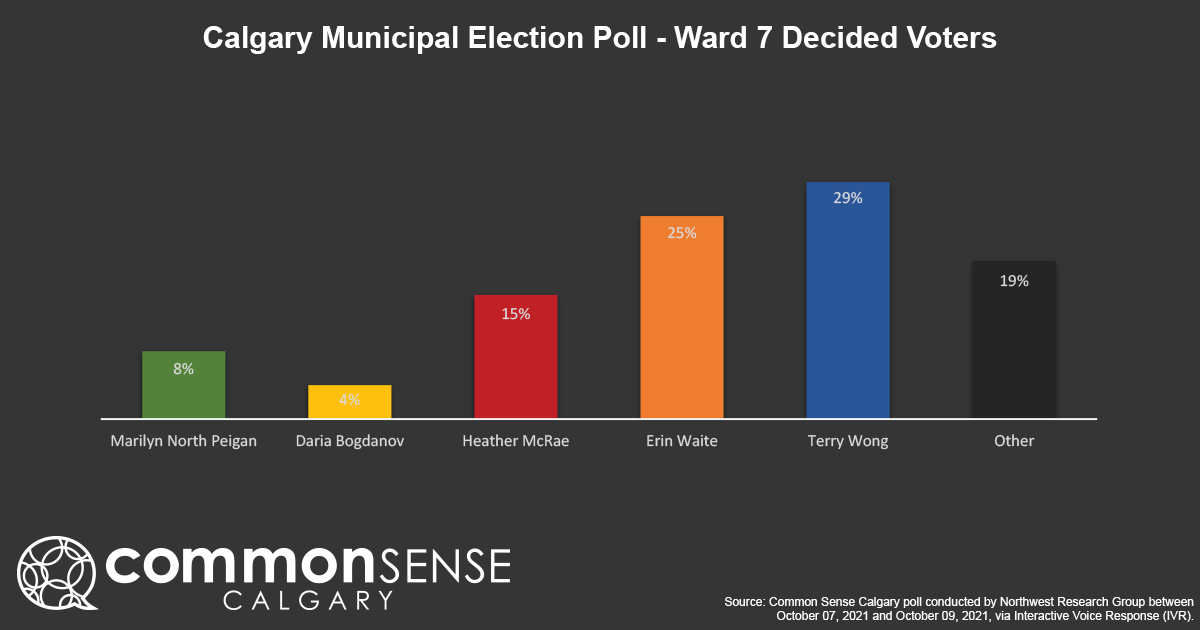 In Ward 8, former City Hall reporter, Gary Bobrovitz, is on 23%, holding a narrow lead over union-PAC-endorsed Courtney Walcott on 18%. 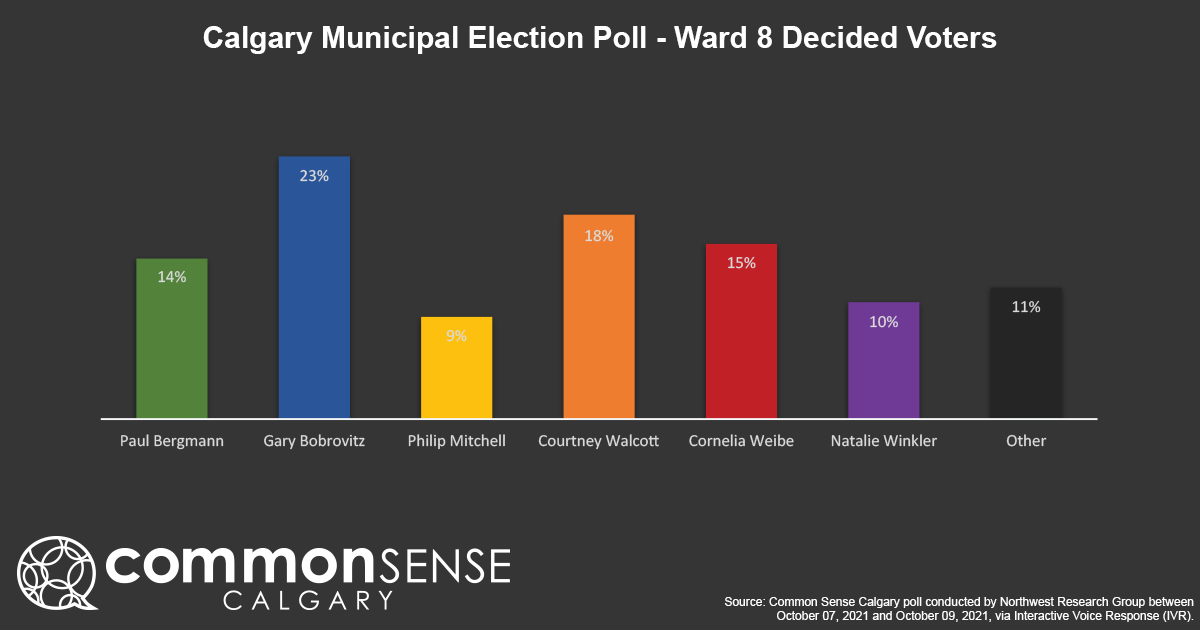 In Ward 9, we have chosen not to release the poll result, as the response rate to our survey provided results with a larger margin of error than we are comfortable with.

In Ward 10, former Councillor Chabot looks set for a return, polling 44%, well ahead of the former staffer to Liberal minister, Marie-Claude Bibeau, and union-PAC-endorsed Abed Harb, on 13%. 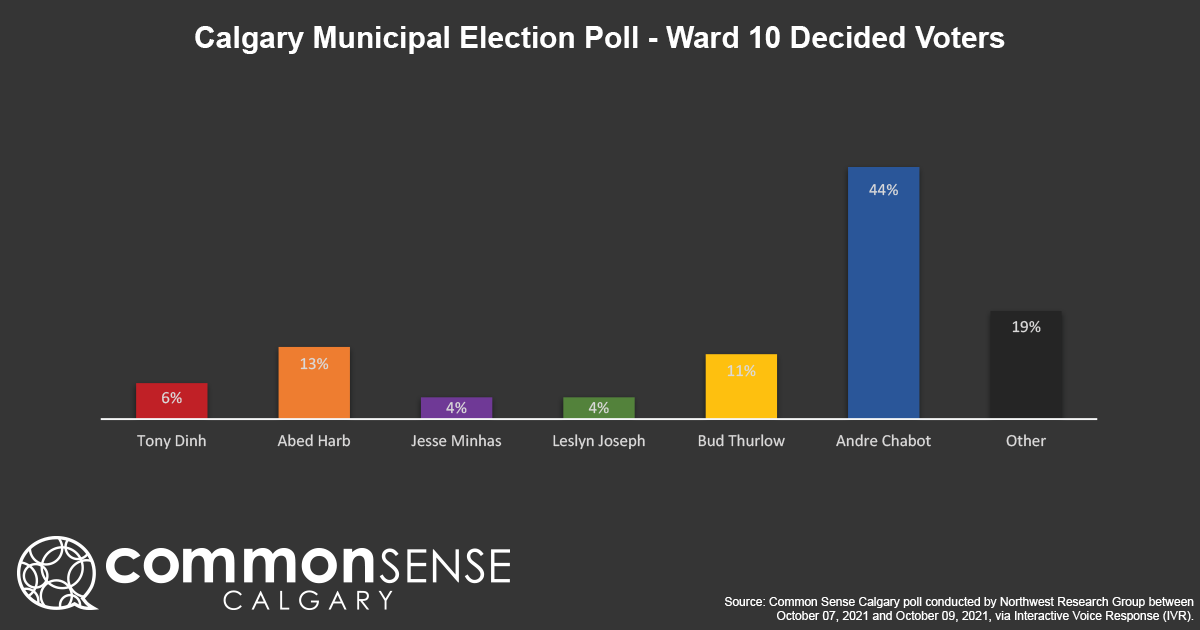 In Ward 11, Rob Ward is in first place with 36%, ahead of the union-PAC-endorsed candidate, Kourtney Branagan, on 22%. 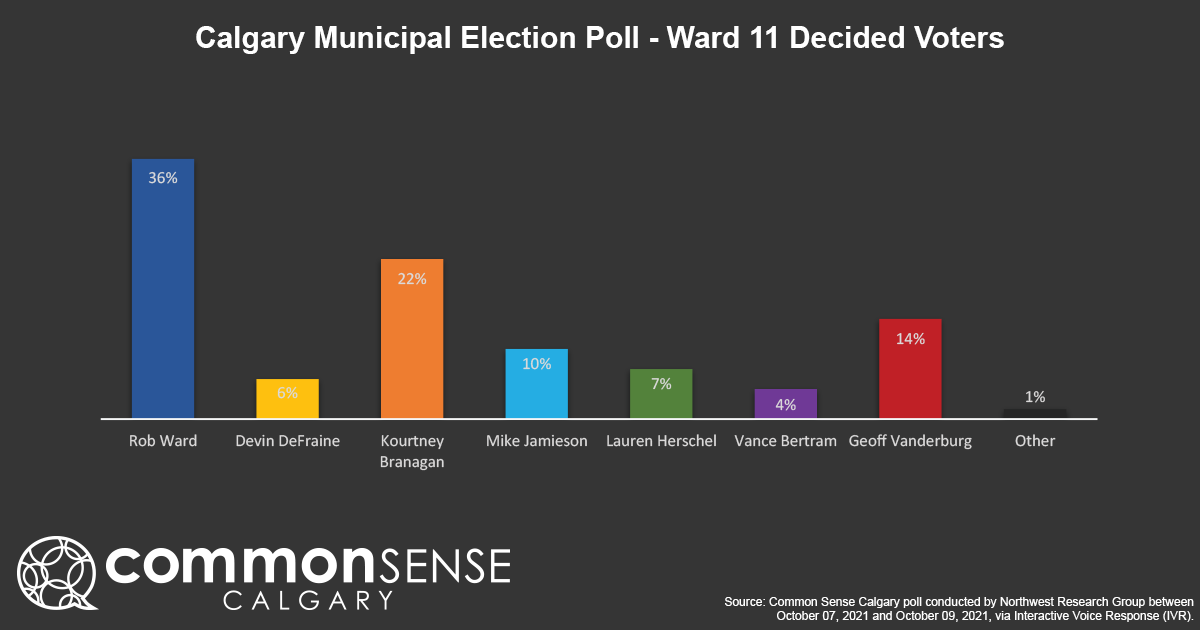 In Ward 12, former Shane Keating staffer, and union-PAC-endorsed candidate, Evan Spencer, leads on 41%, ahead of Craig Chandler on 24% and Steven Phan on 18%. 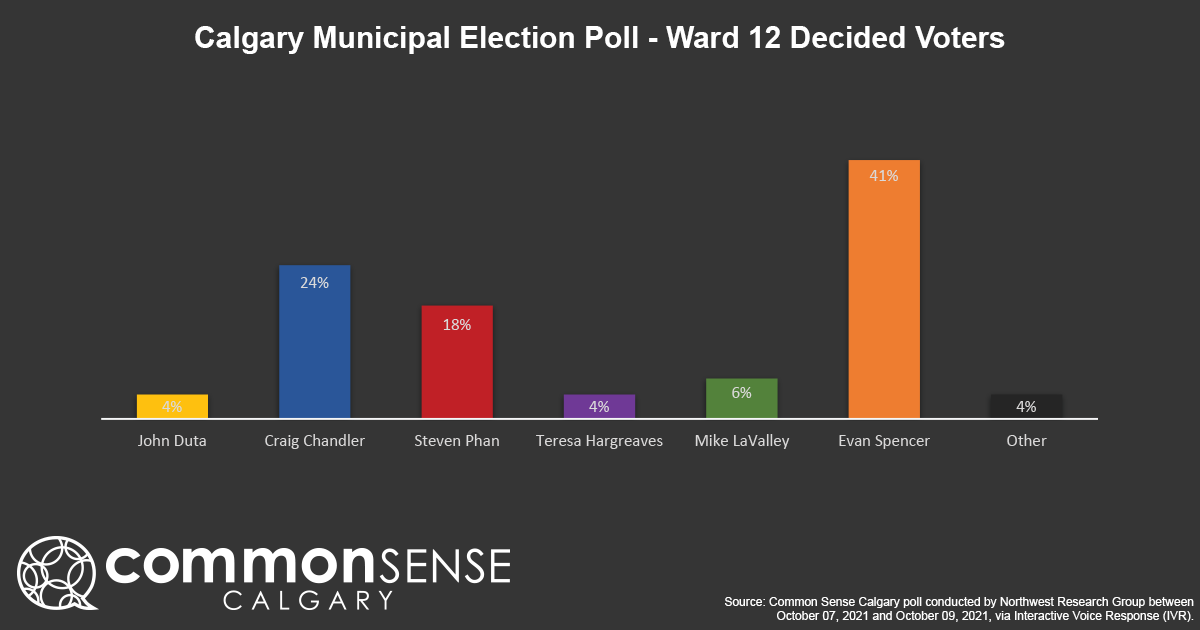 In Ward 13, Dan McLean is well ahead, polling 53%, ahead of union-PAC-endorsed candidate Jay Unsworth on 27%. Long-time Councillor Diane Colley-Urquhart is in third on 20%. 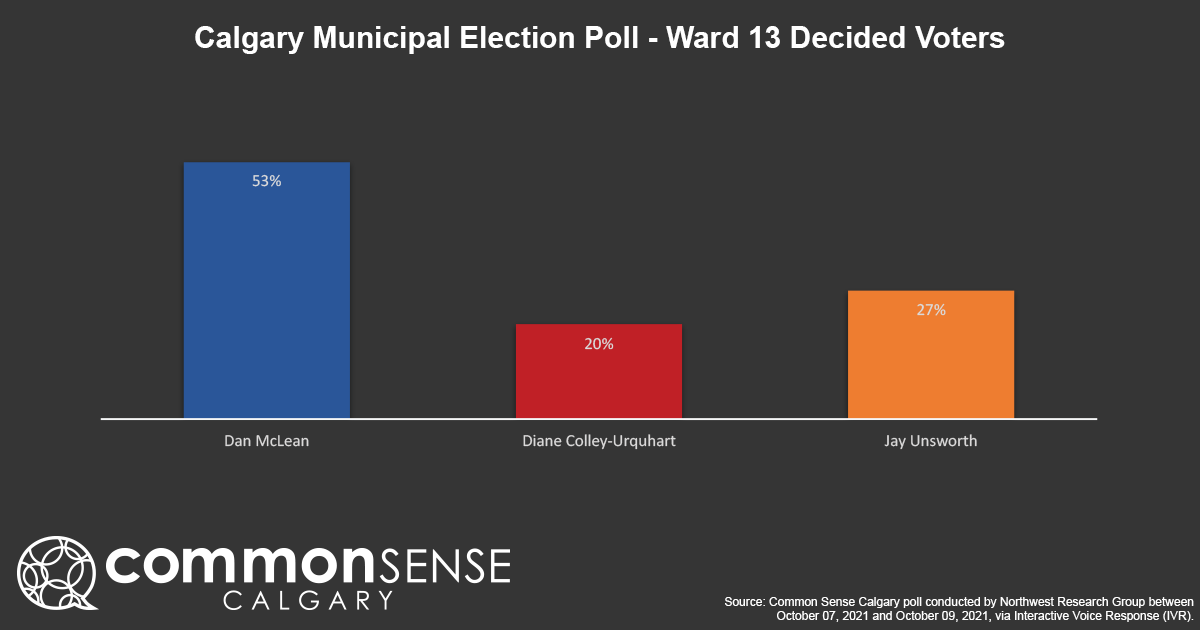 In Ward 14, incumbent Peter Demong is set for re-election again, polling 66%, well ahead of Anton Ovtchinnikov in second place on 16%. 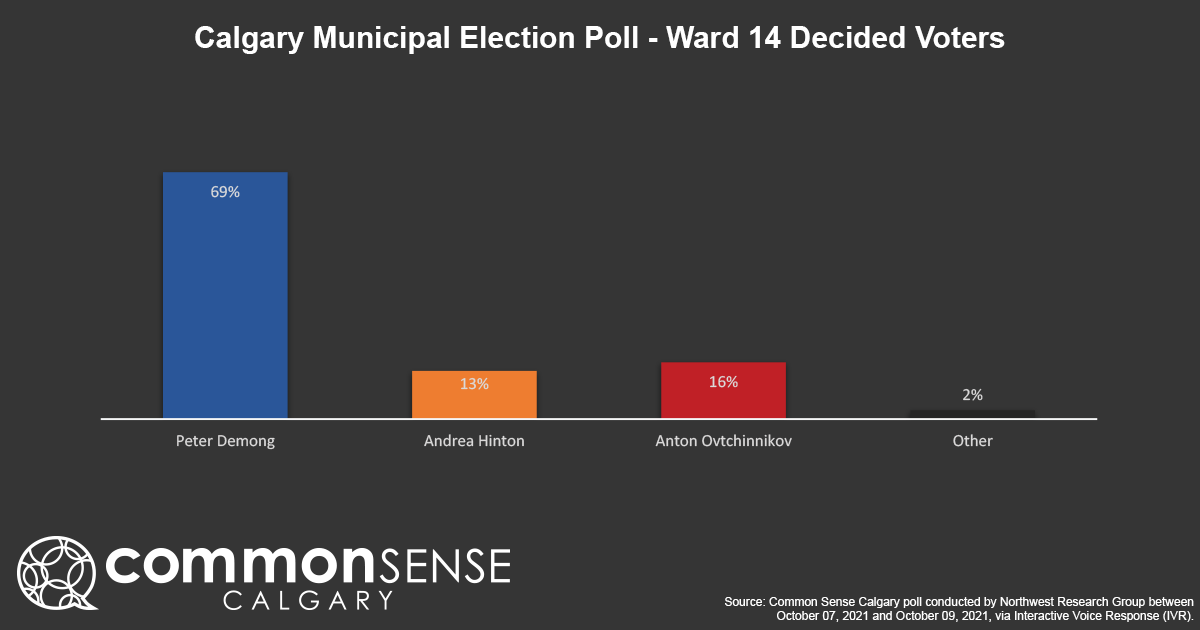 This polling research was conducted by Northwest Research Group between October 07, 2021 and October 09, 2021, via Interactive voice response (IVR), using a random sample of 4,636 Calgarians, distributed across every ward.

We would like to remind you that poll results only capture a snapshot of a race as it was when the sample was taken and that the state of election races can change between the collection of a poll and election day.

Even if things don't change, a poll can always be the one time out of twenty that the results fall outside the margin of error.

Still, we hope you found these results informative, and we wish all the candidates well for the last week of the campaign.

The margin of error for each result is: