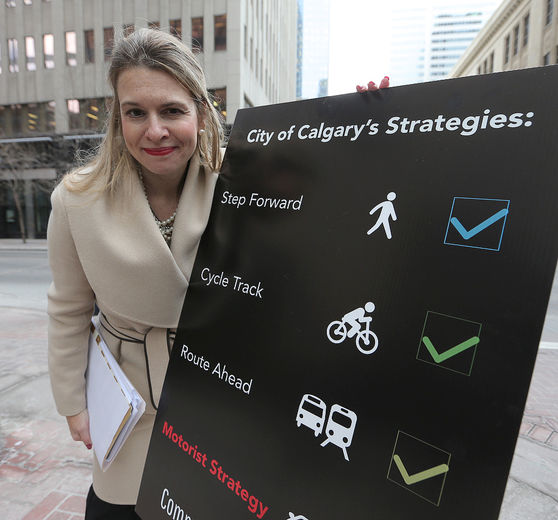 The interests of Calgary motorists have been kicked to the curb by the city, a lobby group said Tuesday.

It’s time for a city hall strategy to reverse that with a focus on relieving gridlock through sustained investment in roads, said Stephanie Kusie, executive director of the group Common Sense Calgary.

“We have noted a growing citizenship frustration...this concern was higher than transit or crime,” she said, citing a recent city citizenship satisfaction survey.

“Unfortunately, little has been done in the last few years to rectify this situation.”

While she noted some major road projects are in the works, the city’s approach isn’t comprehensive, while a vehicle infrastructure strategy is absent.

“We see different projects where the city deals with it piecemeal,” said Kusie. who heads up the group spawned by right-wing Manning Centre think tank.

“City hall has developed a pedestrian strategy, a cycling strategy and a transit strategy but they still haven’t come up with a motorists’ strategy.”

She said her group isn’t opposed to high occupancy vehicle lanes or user tolls to cut down on congestion.

The construction of dedicated bike lanes in the downtown, inner city and elsewhere has met with resistance from some who say it’s reduced parking and hiked congestion.

“A lot of people are still afraid of bringing their bikes downtown,” he said.

Wilcox said he’s grateful for the progress made on bike lanes but added improvements can be made.

And he said moving traffic isn’t the biggest problem caused by bike lanes.

“It’s more of a parking issue than actual gridlock,” he said.