Well, it has been a busy time in municipal politics and here's a quick recap on some of the most interesting issues facing Calgarians recently. Please share this with your friends and please encourage them to join Common Sense Calgary, Follow us on Twitter and Like us on Facebook.

Common Sense Calgary makes a difference as the only organization dedicated exclusively to dialogue on civic politics.

What do you think of this exchange?

Common Sense Calgary received many comments on Facebook about the following exchange between Mayor Nenshi and Councillor Sean Chu. Please listen to the recording and see what you think.

Does the Mayor properly address the substance of Chu's concerns or does he just admonish him for not being prepared? Does it seem like the Mayor is shutting Chu down from speaking freely by saying, "you are harming your cause the longer you talk?" Does the Mayor give Councillor Chu an adequate opportunity to express the serious concerns of businesses and citizens who have been contacting his office?

Use your Common Sense and let us know what you think.

Common Sense Calgary has connected with two grassroots groups that have popped up recently. They are both asking questions related to the residential and non-residential tax increases.

TaxReformYYC suggests that citizens should conduct an independent analysis of their property tax assessments to determine whether Calgary has shown a loose correlation between a property's characteristics and the value assigned by assessors. They believe that human error costs money. TaxReformYYC declares - "Don't pay more than your share." They advise to file an appeal with the City and present an independent analysis of your property's value. Like them on Facebook or visit them at http://www.TaxReformYYC.com

RollBackTaxesYYC is a movement made up of business owners and operators brought together in a common cause: concern about the increase in non-residential taxes. This group originated out of businesses located primarily in the Highland Park Industrial area. They are asking the City not to further strain small and medium size businesses of additional tax burdens and are asking the City to rollback property taxes in 2017 by 5%.

By trying to recover the loss of revenue from the downtown tax base, and shifting the tax burden, the results may be an increase of business closures and that could eliminate the livelihoods of many small business owners and their employees. This group believes that Calgarians can't afford more taxes in the middle of a recession. Roll Back Taxes YYC is inviting Calgarians to take action! Like them on Facebook at https://www.facebook.com/pg/Roll-Back-Taxes-YYC-586889451503090/about/?ref=page_internal

Common Sense Calgary has published several articles about the struggles of businesses in Calgary. These can be found at http://www.commonsensecalgary.com. In addition, here are a couple of links to articles discussing businesses closing their doors amid the downturn in our economy.

Small businesses in Calgary, especially those in the hospitality industry are experiencing tough economic times right now. Franca Flaviano has been serving homemade Italian food in Calgary for about 28 years however, just six years from Franca's located at 3811 Edmonton Trail NE. Franca says that she has definitely noticed a huge downturn in the economic climate in Calgary and a decrease in customers especially on Saturday evening, a night that in the past has always been fully booked.

This quaint little restaurant is located in the heart of Highland Park Industrial, an area that doesn't enjoy the pedestrian traffic of an area like Inglewood or Kensington. Franca and her husband have taken a Common Sense approach to doing everything in their power to keep the doors open. She says that before the downturn they were doing just lunches and dinner on Saturday night. But business has dropped recently on Saturday nights so they have had to change their service and are now hosting more private events, special dinners, wine pairing meals, four-course dinner packages and live music once a month.

City Council was recently criticized for secrecy and a lack of transparency over a failure to disclose the full list of staff hired to work on a study to host the 2026 Winter Olympics. It seemed like Common Sense to talk to Jerry Joynt, the senior vice-president of communications for the 1988 Calgary Games, and tap into the wealth of experience he has from the 1988 Olympics.

Please check Common Sense Calgary's op-ed about the 2026 Olympic exploration bid as it appeared in the Calgary Herald on February 11, 2017.

For more information about the Calgary bid exploration committee please visit http://www.shouldcalgarybid.com . Watch for the public engagement tool on their website in the near future where they will be asking whether you support a bid to host the 2026 Olympic Winter Games.

Why the Mystery Around the City Charters?

There has been criticism of the total lack of transparency about the financial implications of the City Charters for some time. Why has there been no discussion on this issue?

Well, Calgary and Edmonton have a problem – they only have one tool to bolster City revenue to support their unsustainable spending plans: property taxes. At the risk of being labeled a “reductionist” by the Mayor of Calgary, wouldn't it make Common Sense to make efforts across the board to find ways to cut spending? Raising property tax is also politically unpopular, so different tools to generate revenue (read squeeze it from the citizens) are desperately needed in the minds of the politicians and bureaucrats in City Hall and at the Legislature.

Revenue sharing - - does that make sense? Will the provincial government really give up money that it would normally receive? When we hear the word "investment," does that just means tax and redistribute? So Edmonton and Calgary can only borrow a certain amount of money - - there is a limit, and this limit is set by the Province. The limit is based on how much revenue the City generates, just like an average person who has a borrowing limit based on their income level.  So what exactly have debt and taxes got to do with a City Charter? As it turns out, everything. Common Sense Calgary is closely following the City Charters and we think you should too!

Please sign the petition we have posted on our website at http://www.commonsensecalgary.com and http://www.seecharterthinktax.ca. We are encouraging Calgarians to sign this petition asking that a citywide referendum be held on any new taxation powers provided to the City through the City Charters.

Here is a link to an article from Toronto. Will Calgary follow this path once the City Charters are legislated?

A renovation at Calgary City Hall has sparked some fiery criticism of spending after a $3-million makeover transformed a former city hall cafeteria into a council boardroom and large banquet space. This is a 2,426 square foot renovation for about 110 people with a 1,384-square foot boardroom, slated to be used “primarily for in-camera meetings for council.” 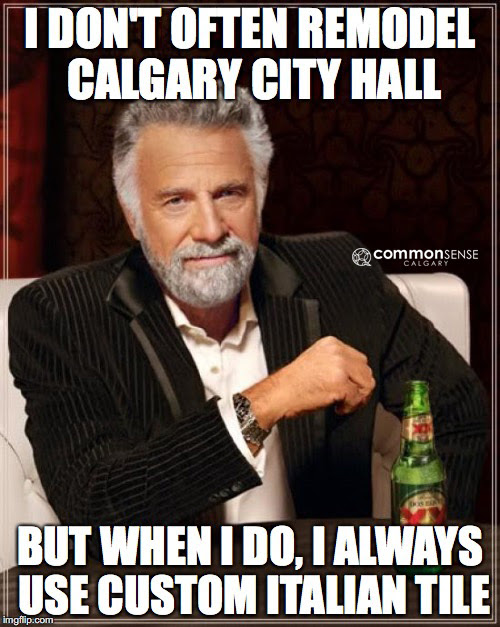 Is this Common Sense spending on City Hall while businesses are shuttering in Calgary and downtown is suffering from a record high vacancy rate?

With too many complaints, too many accidents and too many tickets, do you think that Calgary's snow removal program is working, or do you think it is in serious need of a Common Sense overhaul? Calgary is a winter city. Why have we not figured out snow removal? More than 2500 tickets were handed out for parking on snow routes and just under 1,000 calls were received at City Hall last week. City Councillors are even questioning the efficiency of the snow removal program. The City has an overall budget of 34M for snow removal and do not appear to be doing a good job.

Have you been satisfied with snow removal efforts in your community this year? Our online poll overwhelmingly says "NO!" 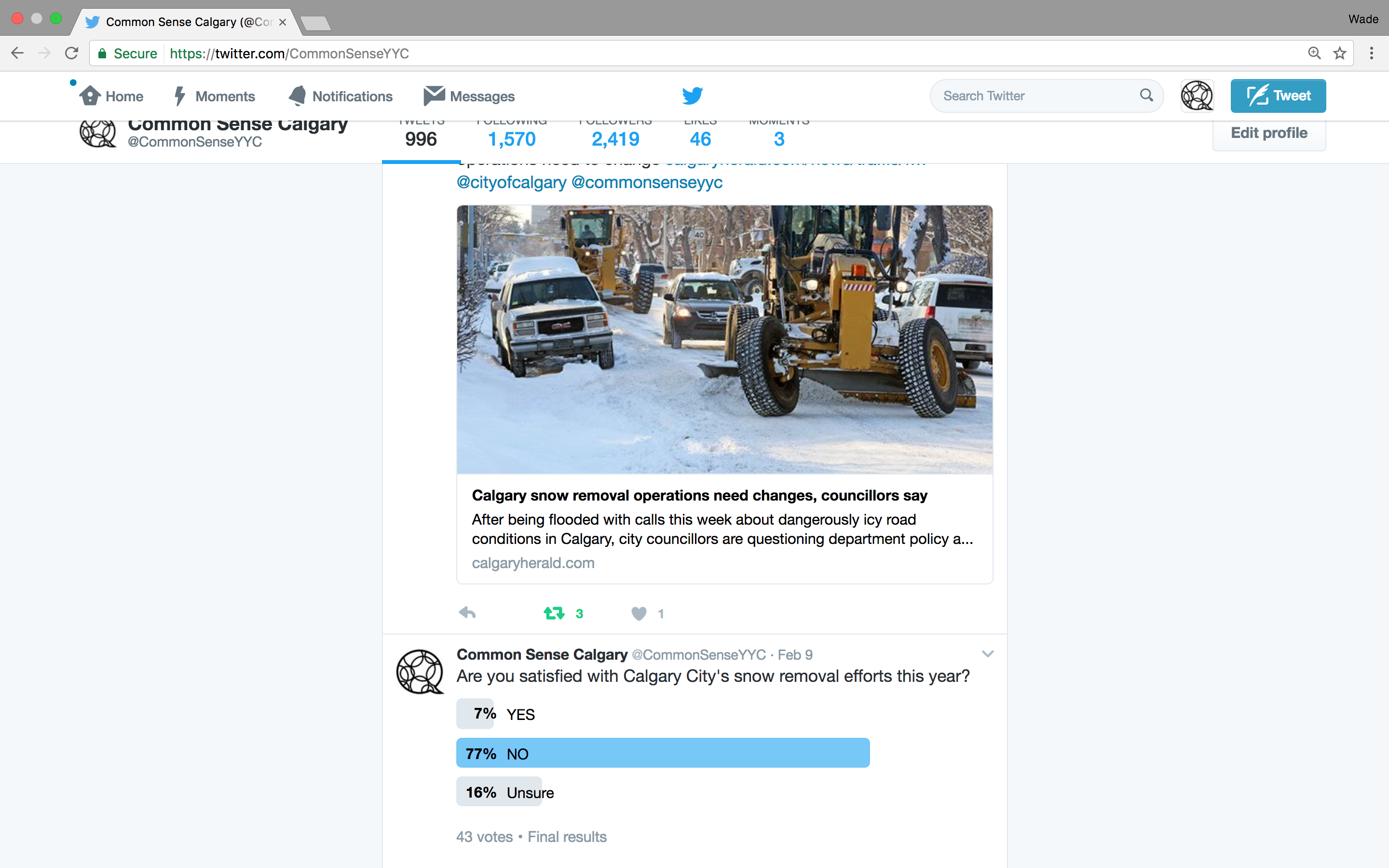 With the 2017 municipal election in just eight months, we are looking forward to more public engagement. Our plan includes election-related events, on-line polling and working with local media to
help Calgarians cast well-informed votes with confidence.

Common Sense Calgary is a non-profit, non-partisan organization powered solely by financial donations. Please consider making a donation to support our cause – a common cause for citizens and business leaders in our city.