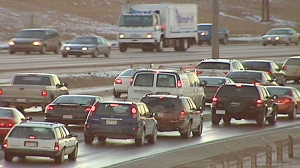 A local advocacy group is calling on the city to develop a motorist strategy to deal with the concerns of Calgarians about traffic congestion — but is getting a lukewarm reception from the city's mayor.

Common Sense Calgary, a public policy group funded by the conservative Manning Centre, says city hall has strategies for transit, pedestrians and cyclists but no coordinated way of dealing with congestion.

The group cites the city's Citizen Satisfaction Survey, in which 26 per cent of respondents mention traffic, roads and infrastructure among their top concerns.

The group's executive director, Stephanie Kusie, said the city's transportation plan may include millions of dollars in spending on roads and interchanges each year. But it's not working, she said.

The city's Citizen Satisfaction Survey found respondents felt that improving public transit would be the best way to improve transportation issues in Calgary.

"If their answer is to build more roads and synchronize all the green lights, try again."

Common Sense Calgary receives funding from the Manning Centre as well as individual donors. It does not sell individual memberships.