BIAs are effectively compulsory unions for businesses. Every business in the area must join and fund the BIA through an extra tax. 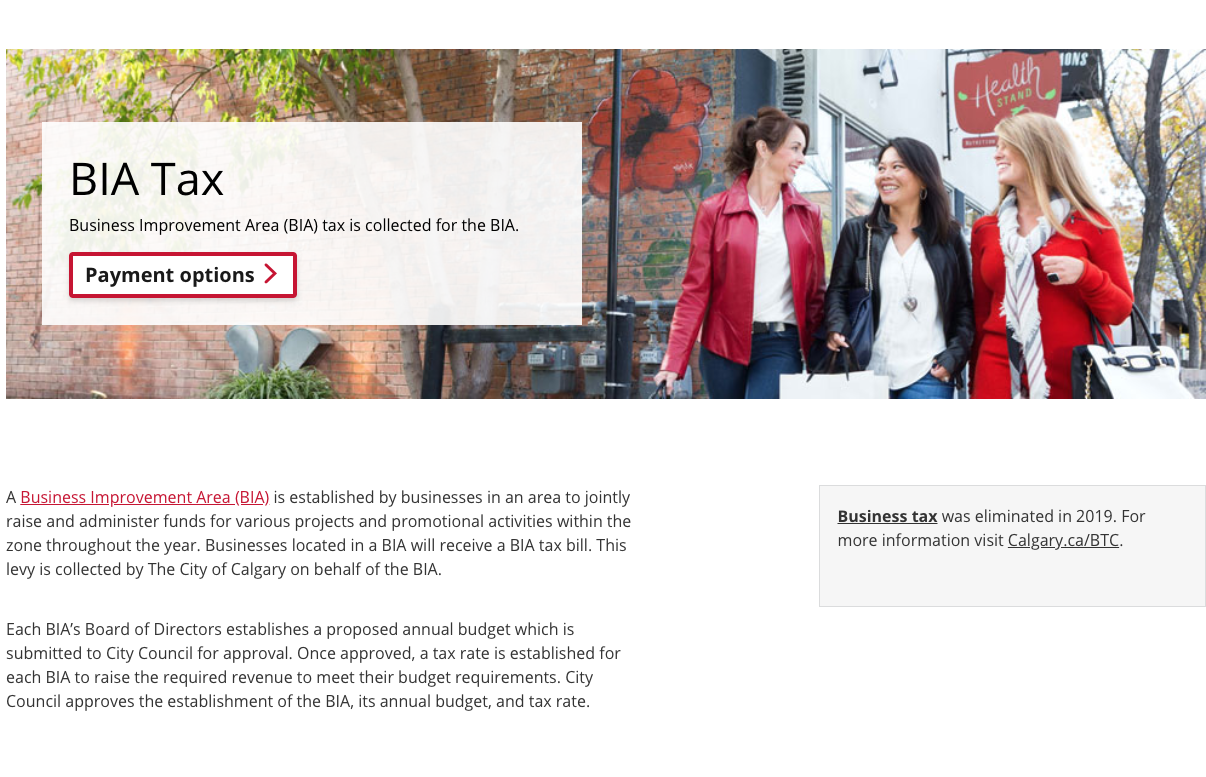 In theory, BIAs are meant to provide basic public goods like parking improvements and street beautification, and while those are things that we as Calgarians and Calgarian business owners pay taxes for already, there is a case to be made that delivering them more locally could be more effective.

Unfortunately, City Hall seems to see BIAs as a way to off-load responsibility for these basic services on to another group and rather than lowering other taxes to keep the overall tax burden the same, they treat it as an extra tax and keep spending more and more on non-essential pet projects.

To make matters even worse, some BIAs have taken it upon themselves to expand their own role - twisting and distorting the meaning of "public good" to breaking point, to allow them to do almost anything their unelected boards want to do.

In recent years Calgary's various BIAs have lobbied for increased taxes on Calgary residents, development policies that would dramatically increase the cost of housing, organized petitions and protests on a variety of provincial and federal policies, and opposed developments in their areas that would lead to more competition for the BIA's member businesses.

Again, remember, this isn't some voluntary chamber of commerce or community group lobbying council, this is an arm of the government that businesses are forced to join and pay taxes to, that are turning around and using those taxes to lobby for things that many of their "members" don't agree with!

In effect, BIAs serve as compulsory unions for businesses, and if you're familiar with some of the problems with unions, the next challenge with BIAs probably won't surprise you very much.

The imposition of a union at a workplace is often controversial because the rules around how to unionize can be incredibly biased, and the behaviour of unions during the process is often unacceptable.

Claims of everything from bullying tactics to obtain signatures to outright corruption in the voting process are common.

Ideally, each individual worker should have the right to choose whether to join their union or not.

But, at least when setting up a union, you at least need a majority of workers in favour of the idea, either through a vote of workers, or - in more radical jurisdictions - automatic unionization after a majority or super-majority sign a petition.

Remarkably, the process for creating a Business Improvement Area is actually dramatically worse than even the worst worksite unionization processes, and there are three main problems with the process:

Forget needing a majority - a new BIA can be set up by by collecting a petition with the signatures of only 25% of local business owners.

Yet, if you happen to own a business in the area of a proposed BIA and you don't want to pay even more council taxes, well, you'll need more than 50% of businesses to sign a petition opposing the creation of a BIA!

How is it democratic to need twice as many signatures to stop a tax increase than is needed to increase taxes?

Those creating a BIA don't just need to get fewer signatures - they get a far longer time to do so, and, at least in Calgary, it appears they receive support from City officials to do so.

Those wishing to create a BIA can collect signatures over an extended period of time, receiving support, resources, and advice from City officials, in some cases over a period of multiple years.

In many cases, those proposing a BIA don't even tell the businesses signing the petition that the BIA will be paid for by them paying a new tax - many of the businesses believe the City will be paying *them*!

A business owner opposed to the creation of a BIA has only 60 days to organize a counter-petition.

Don't expect any help from the City if you want to fight the imposition of these new taxes either.

Unlike with those who are trying to raise your taxes, City documents make it clear that: "This office will not provide advice or the form of petition to be used for this process."

Those who propose creating a BIA also get to propose the boundary of the BIA.

Yes, you read that right - those wishing to impose a new tax on businesses have the right to gerrymander the map to create an area that ensures the 25% support is achievable.

In the case of the proposed Beltline BIA, the BIA boundaries were shrunk *at least twice* during the process to ensure that the number of signatures that had been collected were greater than the required 25% threshold.

You might think that shrinking a BIA area to exclude some businesses that don't support the BIA would be a good thing, right?

Don't worry - after a BIA is created, it can ask City Hall to expand its map (and its taxable businesses!) without even requiring a petition, nevermind a referendum.

In theory, this system could be manipulated to allow a number of small businesses (perhaps even owned by the same person!) to vote to impose a tax on one or two large businesses.

At the same time as spending millions of dollars lobbying to try to attract big international businesses to Calgary, Council is promoting a system that allows smaller businesses to impose taxes on those bigger businesses.

If you owned a big international tech business, would you move your head office to Calgary knowing that a decent chunk of your tax bill will be decided not by a democratically elected council but by a restaurant, a barbershop, a laundromat and a convenience store that operate on your block?

Finally, aside from all the problems with the BIA creation process, after the formation of a BIA, there is still the question of transparency and accountability.

We're not talking about a small amount of money here.

These unelected boards get hundreds of thousands of dollars of tax money to spend as they see fit.

To be fair, not all of the blame for this mess can be placed entirely on Calgary Council as the process to create a new BIA is defined in the province's Municipal Government Act rather than in Calgary Council's own bylaws.

The province, therefore, needs to step in to resolve this mess.

Ideally, Business Improvement Areas should be made voluntary and be funded through donations given voluntarily by Alberta residents and businesses - exactly the same as how thousands of other Alberta non-profits and charities work.

Alternatively, the province could abolish Business Improvement Areas entirely and municipal governments could just actually do their jobs for once and use existing tax dollars to provide these types of basic services, instead of spending the money on Councillor's pet projects.

In the meantime, however, nothing in the Municipal Government Act prevents Calgary Council Councillors from choosing to apply a higher bar than is required under provincial law and voting down proposals to create BIAs that don't have the full support of businesses in their area.

Common Sense Calgary doesn't accept any government funding and never will. We think you should be free to choose, for yourself, which organizations to support. If you're in a position to contribute financially, you can make a donation here.

If you're not in a position to donate, we understand, but if you appreciate our work, you can help by spreading our message. Please email this post to your friends, share it on Facebook or Twitter, and help make sure every Calgarian knows what's really going on at City Hall.